In anticipation of our internal deadline for moving bills between the House and Senate, the House passed a number of bills last week that have gone to the Senate for its consideration. Three of these bills improve our criminal justice system by decreasing incarceration, reducing the collateral consequences of a criminal record, and clarifying policing practices. Four other bills that the Judiciary Committee considered before they were passed by the House are discussed below.

H.261, the “ban the box” bill, would prohibit employers from asking on an initial job application whether an applicant has a criminal record. There would be an exception for circumstances where certain criminal infractions relate to the job (for example, childcare providers could ask about criminal records related to child abuse). By prohibiting such a question on an initial application, the bill would give an individual with a criminal record a better chance at not being screened out from an employment opportunity at the initial stage of the application process. At a subsequent interview, the employer may ask about an individual’s criminal record, but also must give the applicant the chance to explain. The law would moderate the collateral consequence of a criminal record by giving individuals a chance in the job market, easing their reintegration into society.

H.623, a bill on parole eligibility, provides that older inmates who have not yet served their minimum sentence but present a low risk to the public are eligible for parole. It applies to inmates aged 55-64 who have served ten years, and inmates 65 and older who have served five years.  In addition, an inmate with a serious medical condition that makes the inmate unlikely to be physically capable of presenting a danger to society may be released on medical parole. I was pleased to see this “compassionate parole” bill make it out of the House, as I had cosponsored it with two other legislators.

H.743 extends the legislature’s efforts in implementing fair and impartial policing practices. The bill requires the Criminal Justice Training Council to develop a model policy in fair and impartial policing and law enforcement agencies to train their officers on the policies. In addition, the bill modifies existing mandates related to collecting traffic stop data. Current law requires law enforcement officers to collect roadside stop data such as the age, gender, and race of the driver and the reason for the stop. H.743 requires this data to be provided to the Criminal Justice Training Council and the Human Rights Commission, and that it be posted electronically in a way that is accessible to the public. Law enforcement officials were fully in support of this bill and the improved transparency it provides to Vermont’s policing practices.

The House also passed out two bills related to traffic safety that I have discussed in previous posts. H.571 addresses driver’s license suspensions, which I reviewed in prior posts on March 2nd, February 6th, January 23rd, and January 15th. The bill would fix the broken system in Vermont that relies too much on suspending driving privileges as a means of modifying behavior, particularly as it is misused as a consequence for nonpayment of fines for infractions unrelated to the safety of our roads. It would shift the focus to the points system. Motorists who violate laws that relate to highway safety, such as speeding prohibitions, receive points for such infractions. When they receive 10 points, their driving privileges are suspended because by then it has become clear that they are a danger on the roads. The bill goes beyond the license suspension issue and recognizes that distracted driving reduces highway safety; thus, it provides that an individual violating the handheld ban will receive 2 points for a second or subsequent offense. In addition, it increases the number of points that individuals receive if they violate the handheld or texting bans in a work or school zone. I have previously written about my efforts to address the issue of distracted driving in posts on December 11th and January 30th.

The House also passed H.560, which will add incentives and mandates for individuals to install an ignition interlock device after they have been caught driving under the influence. With such a system, the individual can continue to drive, sober, rather than serving a period of license suspension. Because individuals found to have driven under the influence serving a suspension often drive anyway and sometimes drive drunk, incentivizing first time offenders and mandating subsequent offenders to use an interlock device should lead to safer roads. For further information on the issue, you can view previous posts from March 2nd, February 24th, February 12th, January 23rd.

The House passed out two other bills that the Judiciary Committee had considered. H.818 updates the State’s stalking laws, which I explained in a previous post on February 24th. In addition, H.869 streamlines certain procedures in the courts and adds a new Special Master position to the courts. H.869 is appropriately named the “lighten the load” bill. Finding efficiencies in the courts is necessary because of the alarming increase in CHINS cases (CHINS stands for Child in Need of Care or Supervision) and TPR cases (termination of parental rights) in our court system. These neglect and abuse cases are due to the opiate epidemic in our state and add a substantial strain to the court system, stretching its resources because these cases are complicated, lengthy, and time-consuming. H.869 is a result of many months of collaborative work by stakeholders in the judiciary system and this bill takes steps in finding ways to more effectively and efficiently utilize the resources of the courts. The bill creates a pilot of a new position called a Judicial Master, who will facilitate the implementation of proven treatment court concepts. The Judicial Master will coordinate early intervention and judicial monitoring in cases where substance abuse or mental health issues bring an individual into the judicial system. The bill also streamlines certain appeals of civil violations (primarily traffic tickets) and appeals from the Licensing Board and the Transportation Board.

The next step for these bills is the Senate, where I hope they will receive the attention they deserve and ultimately pass into law.

The following is a memo provided by the Legislative Council that explains S.241, the Senate bill that would legalize marijuana.  You can see the bill itself here.  The House Judiciary Committee will be considering this bill starting later this month. 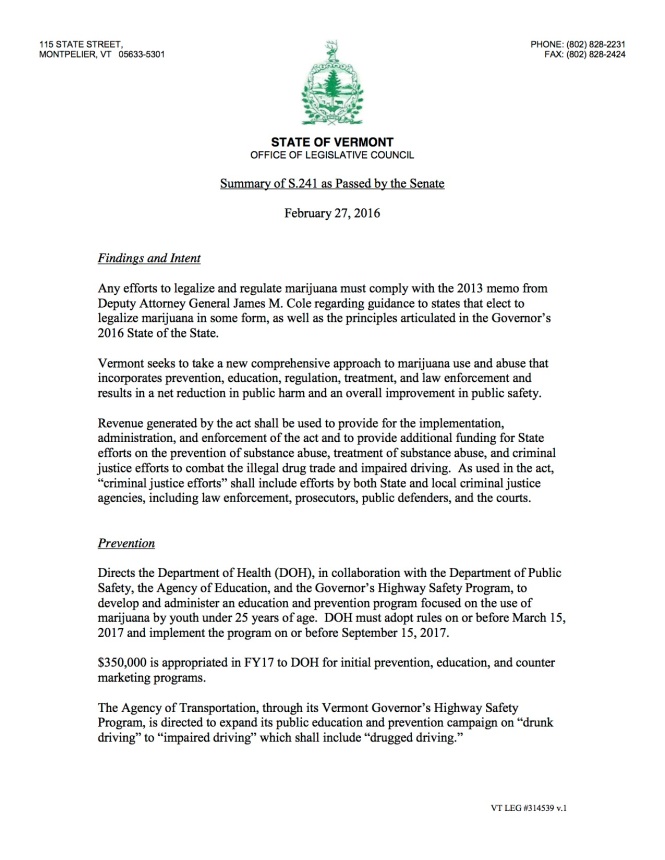 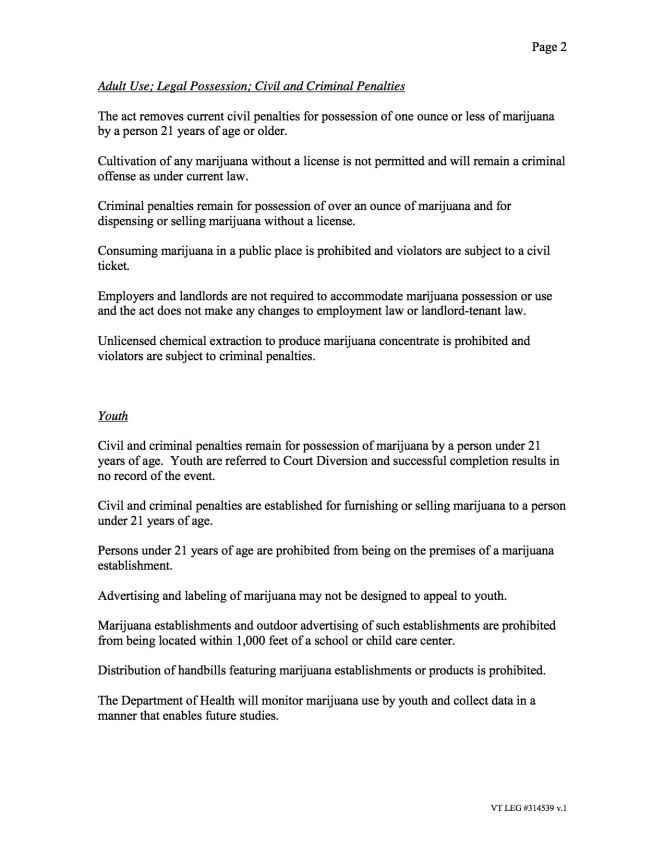 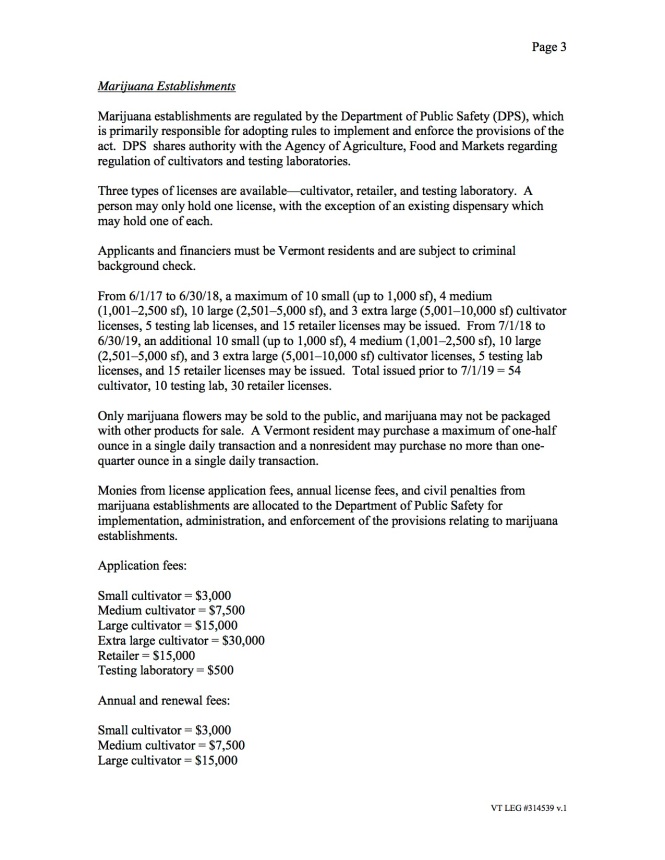 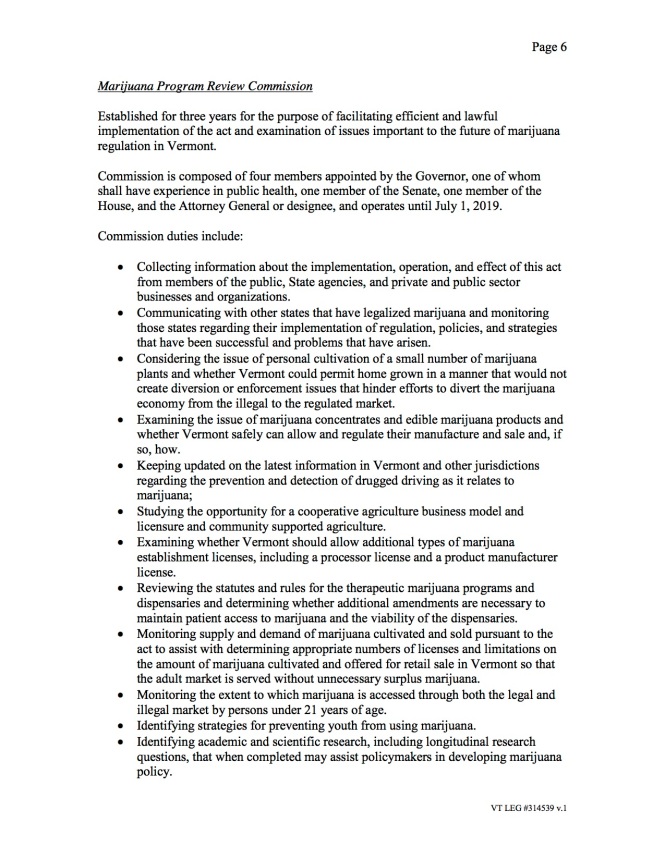 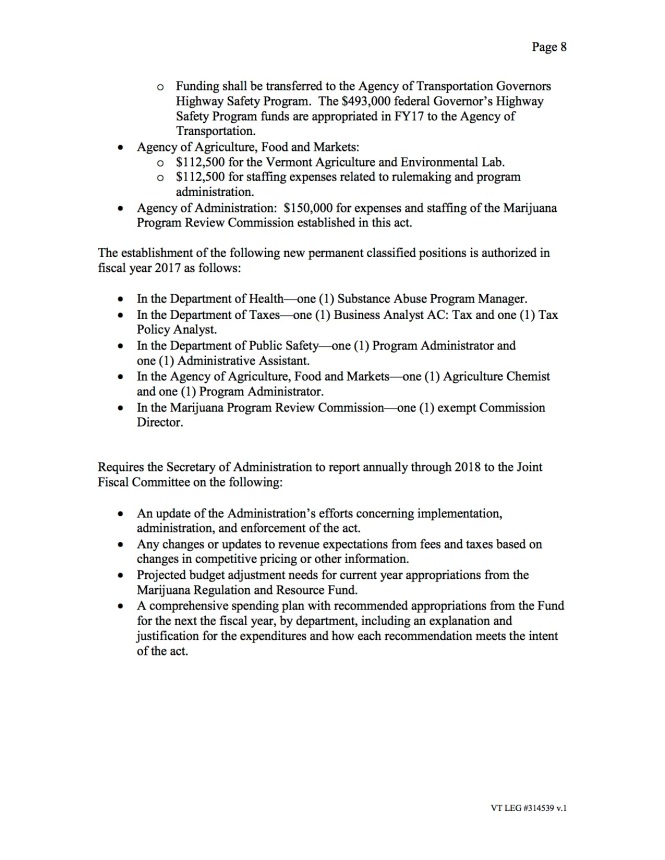 Yesterday I stood outside the polling station at the Orchard School handing out this report, which summarizes some of the issues the legislature has been addressing this year.