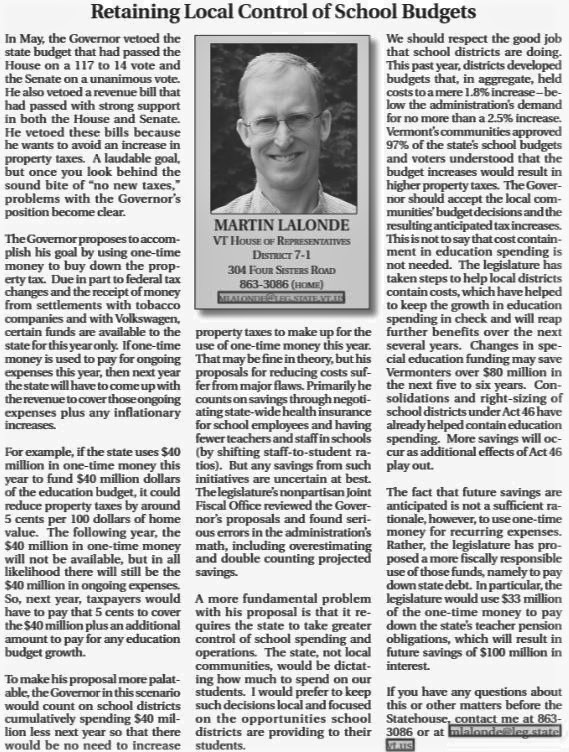 Among his proposals, the Governor in his budget sought to transfer the cost of childcare, higher education, and part of the cost of teacher’s retirement to the Education Fund. He proposed adding $135.9 Million dollars of costs into the Education Fund and increasing the General Fund Transfer to the Education Fund by $86 Million leaving a difference of roughly $50 million dollars. To make up the difference he proposed that school boards go back and level fund their budgets. This proposal comes late in the game and would, as he proposed, require postponing to May 23rd the date on which communities vote on school budgets. On Friday, an amendment to a bill came before the House that would have changed the date of budget votes to May 23rd. The Houser rejected the amendment on a vote of 87 to 47.

The following is a statement that I made during the debate on the amendment:

South Burlington School administrators started work on this year’s school budget back in September. The School Board had its first meeting regarding the budget at the end of September. Work continued on the budget into January. Administrators and the Board put in many hours to ensure that we had a budget that would fulfill the ends of our District. A budget that would ensure that our students are ready for college, careers, or their next steps in life at a cost that the community will support.

Our costs are going up. We have seen increased needs of students who are walking through our doors. We are obligated to provide an appropriate education for all of these students. Our special education costs are going up and our costs to implement state mandates are rising. It took significant time and effort to come up with a budget that meets these needs.

Administrators and school boards should not have to spend another three months of valuable time to redo budgets, to undo the significant work they have accomplished. There are too many other important priorities on which time and energy should be spent to ensure that our public schools continue to be one of the major attractions of our community.

Two other reasons why I am against this amendment. First, to level fund a budget, we in South Burlington would undoubtably have to cut significant numbers of teachers and staff. But we are obligated to provide notices of reductions in force by late March. We are obligated to have all contracts signed with teachers by May first. A budget vote on May 23rd would be beyond these deadlines. Even if those deadlines were removed, problems would be presented. We need to provide notice to teachers on whether they will be employed at our school next year soon. If they are not coming back, they need the time to find new positions.

If we are to significantly change how we are funding our schools, this body needs to be very deliberate and careful. We should tread lightly when dealing with this most important asset of Vermont.

Today is Town Meeting Day in South Burlington, and tomorrow is Election Day.  I prepared a summary of my Committee’s activities so far, as well as other relevant legislative updates, as a handout for my constituents on Election Day. 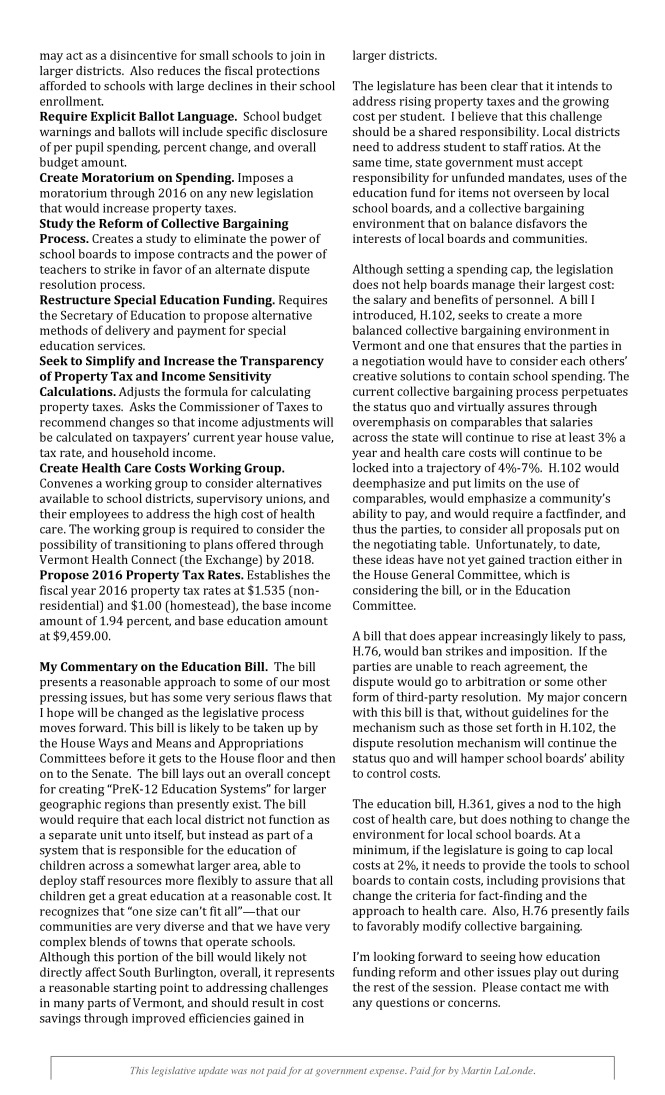 My Other Paper article on February 12 describes my firsthand experience with the Vermont legislative process.